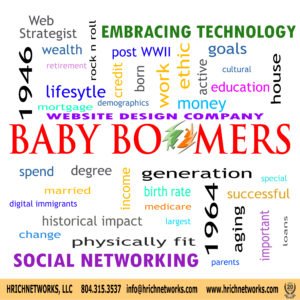 Baby boomers are the demographic cohort following the Silent Generation and preceding Generation X. The generation is generally defined as people born from 1946 to 1964, during the post–World War II baby boom. The baby boom has been described variously as a “shockwave” and as “the pig in the python

Helena Richardson is the CEO of HRichNetworks, LLC. and a native of New Orleans. Helena has over 20 year’s expertise in the technology industry, with experience in a variety of areas including operations, finance, and project management. Helena received a Bachelor of Science degree from the Loyola University New Orleans in Computer Information Systems. Helena worked for several companies during her years in corporate america ranging from government, hospitals, banks, insurance companies and other small businesses. As a Senior Level Application Developer Helena worked at NASA’s, Stennis Space Center in Mississippi, the nation’s largest test site for rocket engines.
Manage Cookie Consent
To provide the best experiences, we use technologies like cookies to store and/or access device information. Consenting to these technologies will allow us to process data such as browsing behavior or unique IDs on this site. Not consenting or withdrawing consent, may adversely affect certain features and functions.
Manage options Manage services Manage vendors Read more about these purposes
View preferences
{title} {title} {title}