Skip to content
Web Services
/
Many doors may close, but always look for the opened door… 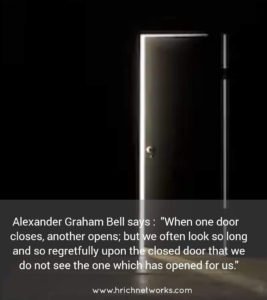 “Many doors may close, but always look for the opened door,” my mother would say.

I could recall many of those incidents, some more vivid than others.

Thinking back in time, I remember one such occurrence. I was working as a Data Processing Tech, and a position became available as a Computer Operator.

A supervisor from Operations admired my work and offered me the job. I was so excited I could not contain myself. As word spread within hours of the offer, the next morning, the supervisor had to decline the position, because my coworkers caused such a stink the night before.

As I walked the halls at work the next morning, angry, betrayed by my close friend and colleagues. I began to pray, and God reminded me of that talk my mother and I had years ago. I didn’t get the job, BUT God. HE, SHUT THE DOOR! He protected me. If I had taken that position, I would have gotten laid off. The state had a massive layoff that year, and because I was the last hire, I would have been the first fired. GOD, OPENED THE DOOR! Soon after, I was offered a job at NASA.

Most people are too attached to the past, to what they are familiar with, and therefore, miss opportunities that stand right in front of them.

Doors may close, but there are always, other, unlimited number of doors – new opportunities. The world is full of opportunities if we could only see them.

Helena Richardson is the CEO of HRichNetworks, LLC. and a native of New Orleans. Helena has over 20 year’s expertise in the technology industry, with experience in a variety of areas including operations, finance, and project management. Helena received a Bachelor of Science degree from the Loyola University New Orleans in Computer Information Systems. Helena worked for several companies during her years in corporate america ranging from government, hospitals, banks, insurance companies and other small businesses. As a Senior Level Application Developer Helena worked at NASA’s, Stennis Space Center in Mississippi, the nation’s largest test site for rocket engines.

Lina Lassiter of Forever Healed, a grief recovery organization in Henrico County, found Richardson very responsive and professional when she was asked to create a registration page for Forever Healed’s classes.

“She brings a vision. She had a lot of good ideas that we hadn’t thought about,” Lassiter said. “She listened to our mission and asked a lot of questions. She went above and beyond what we hired her to do.”

Richardson’s designs are tailored to the specific needs of the customer.